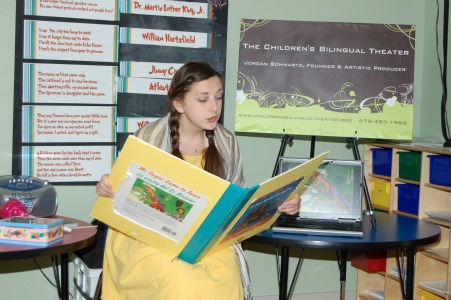 Jordan Schwartz, 18, attends Bryn Mawr College in Pennsylvania. In 2004 she founded The Children's Bilingual Theater, a student-run theatrical outreach organization bringing bilingual programming to venues in the metro-Atlanta area whose cast and crew have reached more than 6,000 audience members and countless school audiences. Jordan is a member of the 2011 PARADE All-America High School Service Team, an award recognizing outstanding young service leaders presented by Parade Magazine in partnership with generationOn, the global youth enterprise of Points of Light.

In second grade I began a "career" in community theater that eventually gave me opportunities in professional theater and TV. I enjoyed the challenge, the friends, the total experience and I knew that I was more outgoing and confident because of theatre. Then in 2003, I read that Cobb County, where I lived, had an increase of 300 percent in our Latino community. Because I have a Spanish-speaking mom and learned the language at home and at summer camps, I wanted to do theater in Spanish or in a mix of both English and Spanish. I thought it would be a great way to get the growing Spanish speaking populations more involved in the community. I was just 10-years-old when I began The Children's Bilingual Theater; an outreach program that I believe is making a “community of difference.”

I am committed to the idea that our theater can make a difference because we are dedicated to giving a diverse group of young people theatre experience while offering the benefits of confidence and public speaking in a bilingual setting. Even though I have operated on a shoe string budget, I find success by taking advantage of all opportunities from grants, sponsorships, and awards to speaking about our work to engage additional community support. Today the Children’s Bilingual Theater is a student-run theatrical outreach company focusing on bringing bilingual programming to venues in the Cobb County and metro-Atlanta area. I have led 200 volunteers, produced six bilingual plays and hosted numerous literacy events.

Our little group grows and shrinks with each production. Kids join, do a show, volunteer and when they move on they have wonderful theatre skills that will always help them speak up, stand up straight, find their mark and as I like to say, "make their mark.”

One project that has been particularly meaningful to me brought together my personal challenges with Turner's syndrome, a congenital disability, with my theatre background. I wrote a bilingual play called Mr. Ooba's TEAM that addresses the issues of bullying of developmentally-disabled and medically-fragile children and diversity in the classroom. Our volunteers have performed it as a reader's theatre and with a student cast. Now with community support we currently are working with Puppatoons and puppeteer Liz Vitale to produce a puppet version to tour in 2012, launching at Sacred Tapestry Church in East Cobb.

When I was in fifth grade and began The Children's Bilingual Theater with 17 volunteers, I could never have imagined that it would one day become an important community organization committed to teaching tolerance by bridging language and cultural gaps in the Atlanta area through the theatre arts. Nor could I have imagined the tremendous impact that this theater company would have on me.

I have learned by leading this group and by producing bilingual performances, that all participants and audience members are impacted by this work. Students develop personal confidence, hone their communication skills and appreciate more deeply the theater. As a grassroots organization, we work closely with the community. Local businesses become program sponsors while government agencies and local leaders support our work while we build bridges and understanding between disparate parts of the community that are sometimes separated by language and culture.