Losing Yourself in Service

May 14, 2012 at 2:10 PM ET by Ronnie Cho
Twitter Facebook Email
Summary:
This edition of "For the Win" spotlights Erin Adams, a high school freshman whose time collecting canned food for charity helped her realize the importance of service. 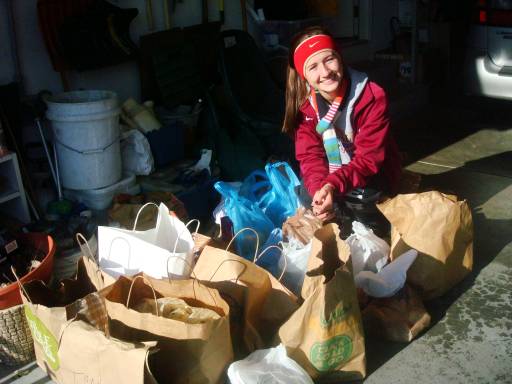 Erin Adams is a freshman at Bishop Watterson High School in Columbus, Ohio. She plays soccer on the varsity soccer team, serves on student council, is a member of Blink 180 (an anti-bullying task force) and sings in the Liturgy Choir. Erin has been actively volunteering for years: gathering more than 500 kids from her elementary school to write cards for patients at Columbus Children's Hospital, visiting nursing homes, feeding the homeless, loading trucks for the St. Vincent de Paul Society at church and delivering Thanksgiving meals to parish neighbors. This year on Make A Difference Day, with the help of her grandparents, Erin collected 344 lbs. of food for the People in Need food pantry in Delaware, Ohio.

“The best way to find yourself is to lose yourself in the service of others.” Mahatma Gandhi

Recently, my grandparents and I were awarded $10,000 to go to the charity of our choice for our efforts on Make A Difference Day 2011. To celebrate, Make A Difference Day my grandparents took me out in the morning and we collected 344 pounds of canned food. We collected cans from 8 a.m. until 11:30 a.m. in two different neighborhoods. At one point during our trip the little red wagon we were using broke down and some cans fell out. We thought we would have to go home and waste time trying to fix it. To our great pleasure, a neighbor came out and checked our wagon to see if he could fix it. After a few minutes of rummaging around in his garage, he came out with a bolt and some tools. With a little work and time our wagon was back to new. I believe that man who came out and helped us was a symbol of service. It was early in the morning and he came out and helped us without delay. Without him, we may not have been able to carry on with our collecting.

From collecting these cans, I have realized that service benefits the community immensely. We collected 344 pounds of food which is enough to feed a family of four for three weeks! Without the service from the community that family might have gone hungry. Every year 15 million children die of hunger. I’ve been alive for 15 years, so while I have been blessed with endless amounts of food, 225 million children have died from hunger. This is very eye opening to me and I want to help, even if my contribution is small. Someone wise once said, “We’re more interested in a million people with 10 dollars, than 10 people with a million.” Some people think that some acts of service are smaller and less important than others. I think that all service is important no matter how big or small.

I know service has really opened my eyes to the troubles and hardship children and adults face on a daily basis. I think some of us are so caught up in our own lives we don’t notice the troubles others face. I am very thankful for all my opportunities to serve and I hope I can set an example for others.