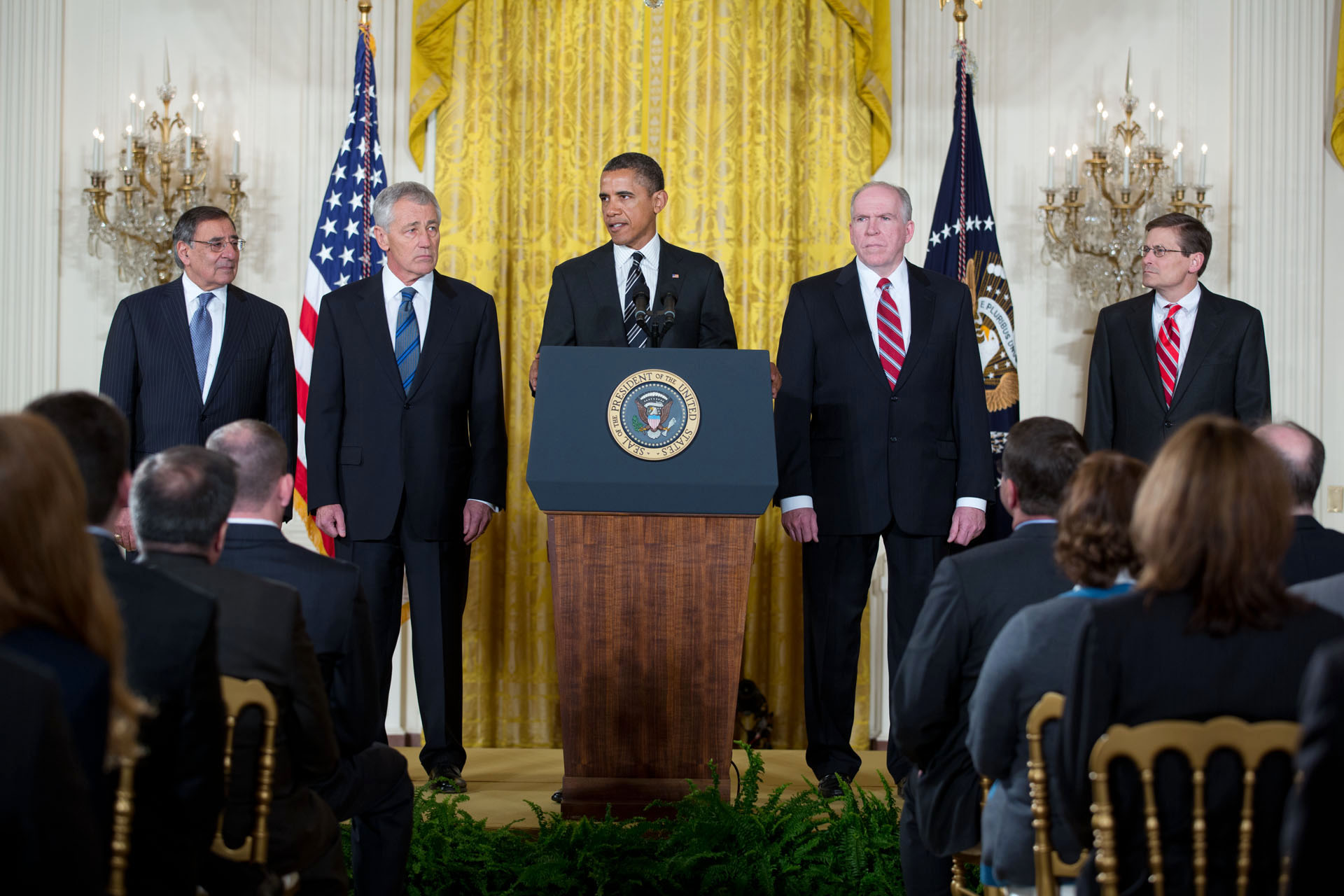 President Barack Obama announces former Senator Chuck Hagel, second from left, as his nominee for Secretary of Defense, and John Brennan, Assistant to the President for Homeland Security and Counterterrorism, second from right, as his nominee for Director of the CIA, during an announcement in the East Room of the White House, Jan. 7, 2013. Joining them are departing Defense Secretary Leon Panetta, left, and acting CIA Director Michael Morrell, right. (Official White House Photo by Lawrence Jackson)

Speaking from the East Room of the White House, President Obama today announced two key nominations for his national security team. He tapped John Brennan to serve as the director of the Central Intelligence Agency, and he asked Sen. Chuck Hagel to serve as Secretary of Defense.

"Chuck Hagel’s leadership of our military would be historic," he said. "He’d be the first person of enlisted rank to serve as Secretary of Defense, one of the few secretaries who have been wounded in war, and the first Vietnam veteran to lead the department. As I saw during our visits together to Afghanistan and Iraq, in Chuck Hagel our troops see a decorated combat veteran of character and strength. They see one of their own."

The President and Hagel have known each other for nearly a decade and served together on the Senate Foreign Relations Committee. Hagel spent two terms in the upper chamber of Congress and helped to lead the fight for passage of the Post-9/11 GI Bill. Under President Reagan, Hagel served as a deputy administrator of the Veterans Administration, and while co-founding his own business, he served as the CEO of the United Service Organization. He's also co-chaired the Intelligence Advisory Board for President Obama.

"Chuck knows that war is not an abstraction," President Obama said. "He understands that sending young Americans to fight and bleed in the dirt and mud, that’s something we only do when it’s absolutely necessary."

At the event, Sen. Hagel thanked the President for the opportunity to again serve the United States and its men and women in uniform.

"These are people who give so much to this nation every day with such dignity and selflessness," he said. "This is particularly important at a time as we complete our mission in Afghanistan and support the troops and military families who have sacrificed so much over more than a decade of war."

Watch video of the event: