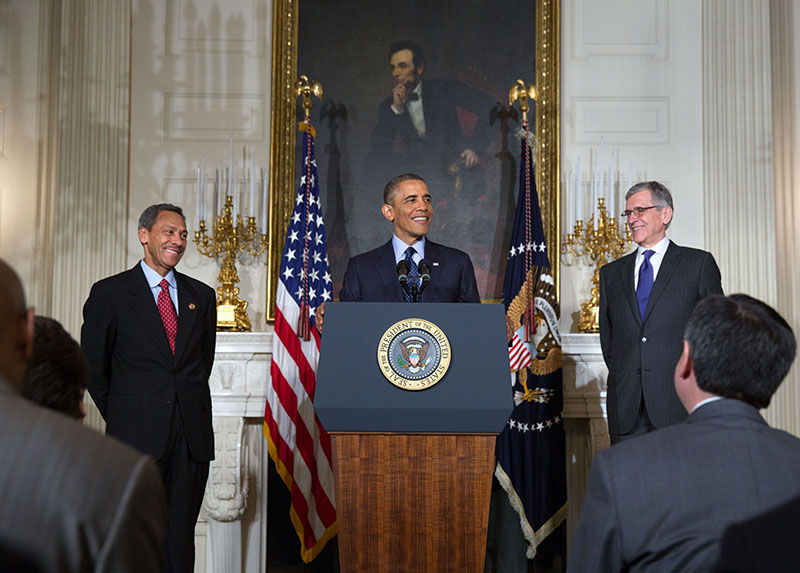 President Barack Obama announces the nominations of Rep. Melvin Watt, left, as Director of the Federal Housing Finance Agency (FHFA) and Tom Wheeler, right, as Chairman of the Federal Communications Commission (FCC), in the State Dining Room of the White House, May 1, 2013. (Official White House Photo by Lawrence Jackson)

President Obama announced his intent to nominate a new director of the Federal Housing Finance Authority and new Federal Communications Chair, “two outstanding individuals who are going to help us grow our economy, but are also going to be looking out for the middle class.”

Seven years after the housing bubble burst, we’re starting to see some bright spots in one of the most important parts of our economy, President Obama said. But we still have more work to do:

We've got responsible homeowners who have never missed a payment, but aren’t allowed to refinance.  We've got working families who are doing everything right, but still owe more on their homes than they’re worth. We've got young people who are trying to start a family and get into the housing market, and have seen difficulties in terms of financing.

President Obama’s pick for FHFA director, Rep. Melvin Watt, has served for 20 years as a member of the congressional committee that oversees housing policy.

And in that capacity, Mel has led efforts to rein in unscrupulous mortgage lenders. He’s helped protect consumers from the kind of reckless risk-taking that led to the financial crisis in the first place. And he’s fought to give more Americans in low-income neighborhoods access to affordable housing.

“Mel understands as well as anybody what caused the housing crisis,” President Obama said. “He knows what it’s going to take to help responsible homeowners fully recover.”

President Obama said that Tom Wheeler, his choice for FCC Chair “has been at the forefront of some of the very dramatic changes that we’ve seen in the way we communicate and how we live our lives.”

"He was one of the leaders of a company that helped create thousands of good, high-tech jobs," the President said. "He’s in charge of the group that advises the FCC on the latest technology issues. He’s helped give American consumers more choices and better products."

And as technology continues to shape the way that we do business and communicate and transform the world, President Obama said that Wheeler will help the FCC fulfill a very important mission, “giving businesses and workers the tools they need to compete in the 21st century economy, and making sure we’re staying at the cutting edge of an industry that again and again we’ve revolutionized here in America.”