Week In Review: Ebola, ISIL, and a New Law

February 13, 2015 at 6:18 PM ET by Chris Evans
Twitter Facebook Email
Summary:
From welcoming Chancellor Angela Merkel to signing a bill into law, the President had a busy week. See more in our latest Week In Review.

This week, the President welcomed Chancellor Angela Merkel to the White House, introduced the next phase in our fight against Ebola, submitted a draft proposal to Congress to authorize military force against ISIL, took his #GetCovered message to BuzzFeed, and signed the Clay Hunt Act into law.

Find out more about the past week at the White House in our latest weekly wrap-up.

"One of Our Strongest Allies"

On Monday, President Obama held a bilateral meeting and working lunch with Chancellor Angela Merkel of Germany -- a nation that the President called one of America's strongest allies. Along with talking about economic growth, international trade, and climate change, the two leaders spent time discussing Russia's aggression against Ukraine and the ongoing fight against ISIL.

Watch President Obama and Chancellor Merkel's joint press conference and learn more about their alliance in making the world a safer place.

Progress in the Battle Against Ebola

Since the first cases of the current Ebola outbreak surfaced last March, there have been more than 22,500 reported cases in West Africa, and more than 8,900 people have died from this devastating disease. To effectively protect the American people, we must confront this outbreak at its source. That's why the U.S. has not only launched a government-wide approach to strengthen our preparedness here at home, but is also leading the fight on the frontlines of the epidemic in West Africa.

Chart of the week: New #Ebola cases in West Africa are on the decline → http://t.co/kICO4RphOx pic.twitter.com/1i6R0Vet81

Thanks to these efforts, and the work of countless others from around the world, the number of people who are contracting Ebola has declined sharply in the last few months.

Look at our latest chart of the week to see the progress we've made in the battle against Ebola.

"We Are Stronger as a Nation" When We Work Together

On Wednesday, the President submitted a draft proposal to Congress that would authorize the continued use of military force against ISIL. A bipartisan authorization of the use of military force (AUMF) against ISIL would provide a clear and powerful signal to the American people, our allies, and our enemies that the U.S. is united behind the effort to degrade and destroy this terrorist group.

While the President already has the legal authority needed to take action against ISIL, he noted that we are strongest as a nation when the President and Congress work together. See what the President said about ISIL, and learn more about the AUMF.

There are things that everybody does but doesn’t talk about: sounding out words, taking selfies, doodling. In a video on BuzzFeed yesterday, President Obama proved he's just like us -- in order to spread the word about the health care enrollment deadline this Sunday, February 15.

"YOLO man!" Find out why President Obama has a selfie stick—and #GetCovered by February 15: http://t.co/edMm32q3mA pic.twitter.com/VqzhrcrA7I

Watch the hilarious video and head over to HealthCare.gov if you need to get covered -- you only have two days left!

The President Signed A Bill Into Law

Thursday, the President signed the Clay Hunt Act into law -- a testament to the care our troops deserve. The new law is named in the honor of Clay Hunt -- a dedicated Marine who served with distinction in Iraq and Afghanistan. It builds on a long history of executive actions that the President has issued to improve access to mental health services for members of the Armed Forces, veterans, and their families. 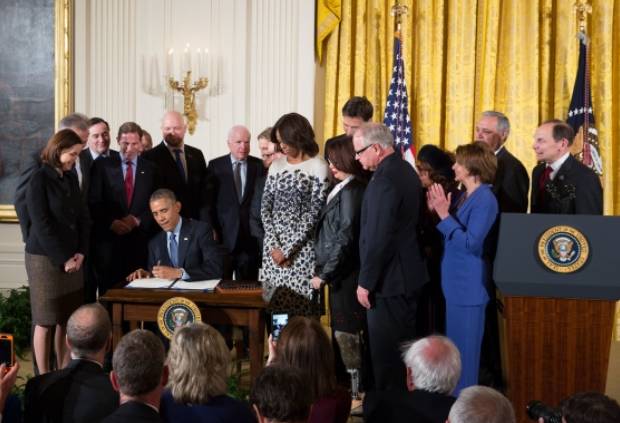 Find out what America’s newest law does for veterans and watch the President’s remarks.

Jenna Brayton is an Associate Director of Content for the Office of Digital Strategy at the White House.