Today’s updated projections of national health expenditures suggest that growth in per-enrollee health care spending remained low in 2015, and other data indicate that slow growth in per-enrollee spending has continued during 2016. Aggregate national health expenditures are estimated to have continued to grow more quickly in 2015 as millions more people gained coverage, but this source of upward pressure on health care spending growth will wane as coverage stabilizes at its new, higher level.  Looking ahead, there is reason for optimism that a substantial portion of the recent slow growth in health costs reflects structural changes in the health care system, including reforms in the Affordable Care Act, that may produce sustained downward pressure on health care cost growth in the years ahead.  Nevertheless, as the President wrote in the Journal of the American Medical Association earlier this week, major opportunities to improve the health care system remain, so policymakers should build on this progress, including by continuing to implement delivery system reform and taking action to reduce prescription drug costs.

1. Underlying growth in health care costs is estimated to have remained low in 2015 in both Medicare and private insurance. While the actuaries will not release their final estimates of 2015 health care spending until later this year, today’s projections incorporate some data on actual trends during 2015. Real per-enrollee Medicare spending is estimated to have risen 1.3 percent in 2015, faster than the exceedingly slow growth rates in 2012 and 2013 but far below the 3.6 percent average rate from 2000-2010. This makes 2015 the sixth consecutive year in which real per-enrollee Medicare spending grew more slowly than real per capita GDP.[1] In private insurance, the actuaries estimate that real per-enrollee spending rose at a 2.1 percent pace, well below the 2000-2010 average of 5.0 percent and only modestly above the growth rate of real per capita GDP. As discussed below, due to ongoing gains in insurance coverage, per-enrollee spending growth provides a clearer picture of the underlying trend in health care costs than aggregate spending growth, which also incorporates the effect of recent coverage gains on health care spending.[2]

2. Preliminary data suggest that growth in per-enrollee health care spending has remained low so far in 2016. While these new estimates of national health expenditures in 2016 are projections, some preliminary data on actual health care spending trends during 2016 are available. The Bureau of Labor Statistics’ Employment Cost Index indicates that employers’ per-hour spending on health benefits grew by 3.3 percent from 2015:Q1 to 2016:Q1, only modestly above the low growth rates recorded in recent years and less than half the 6.8 percent annual average growth rate recorded from 2000:Q1 to 2010:Q1. Similarly, CEA analysis of preliminary data from the Monthly and Daily Treasury Statements indicates that nominal per-enrollee Medicare spending was 1.4 percent higher in the first five months of 2016 relative to the same period in 2015, a slower pace of growth than for 2015 as a whole. While a comprehensive assessment of spending during 2016 must await additional data, these data imply that per-enrollee health care spending growth is likely to remain low this year. 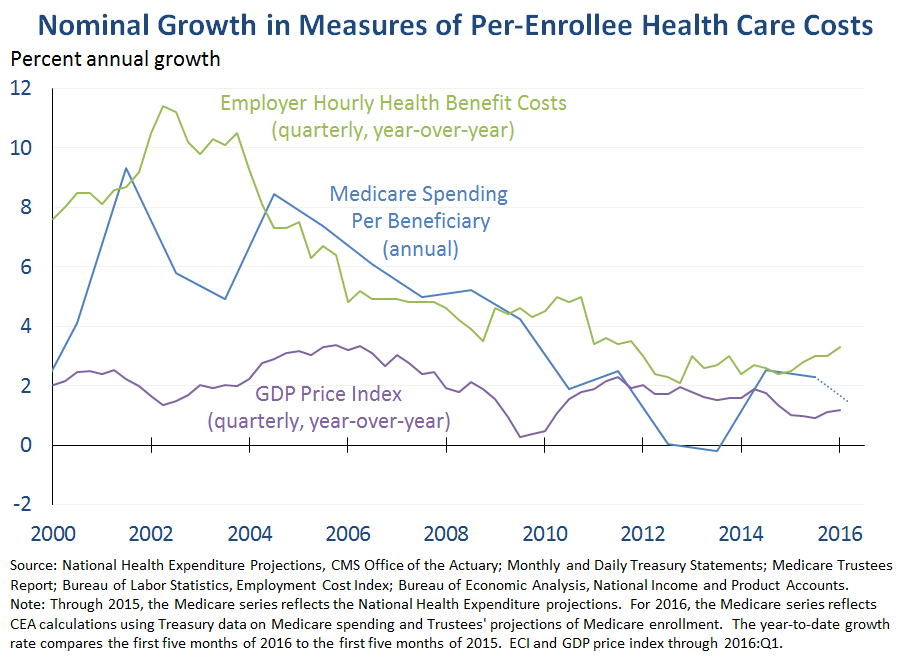 3. Without the transient growth in utilization from expanding insurance coverage, overall health care spending growth would likely have been near the bottom of its historical range in 2015. The Affordable Care Act has driven the largest reduction in the uninsured rate since the creation of Medicare and Medicaid. Thanks to the law, an estimated 20 million people now have insurance coverage, and more than 9 in 10 people have health insurance for the first time ever. Despite this sharp expansion in coverage, today’s projections imply that real per capita national health expenditures—that is, real national health expenditures per person in the population—grew 3.6 percent in 2015, below the historical average annual growth rate of 4.6 percent for the 1960-2010 period, but faster than the years immediately before 2014.

As we have noted previously, it is neither a surprise, nor a cause for concern to see overall NHE temporarily grow more quickly while coverage is transitioning to its new, higher level. One important goal of expanding coverage is to improve access to care for the newly insured, and faster growth in NHE is an important indication, consistent with evidence from surveys of individuals, that access to care is, in fact, improving. In addition, for people who had coverage before, what matters is not growth in overall NHE, but rather growth in per-enrollee spending, which remains low. And from a fiscal perspective, the additional costs to the Federal government were more than fully offset, so the law as a whole is substantially improving the fiscal outlook. 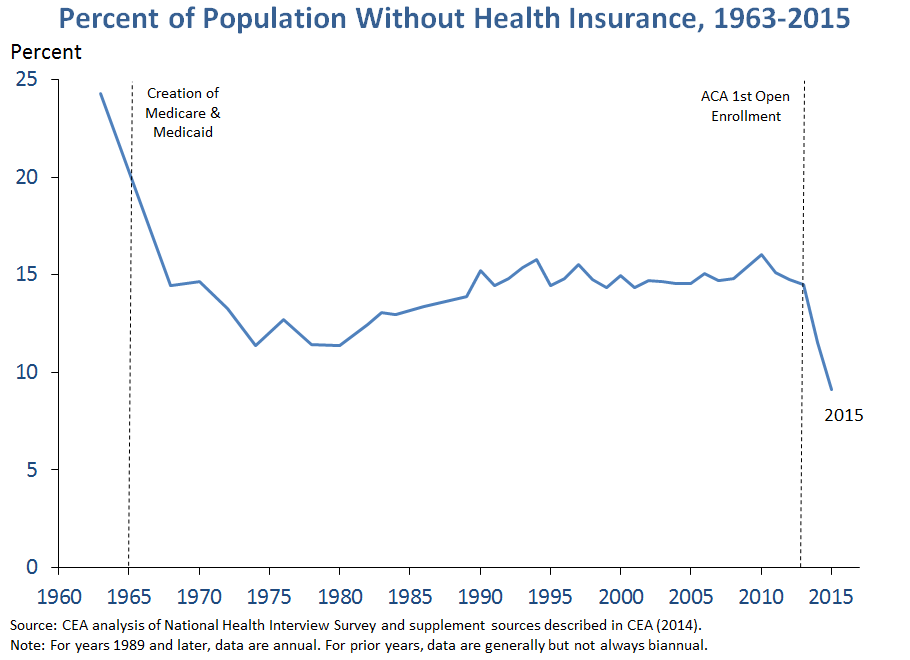 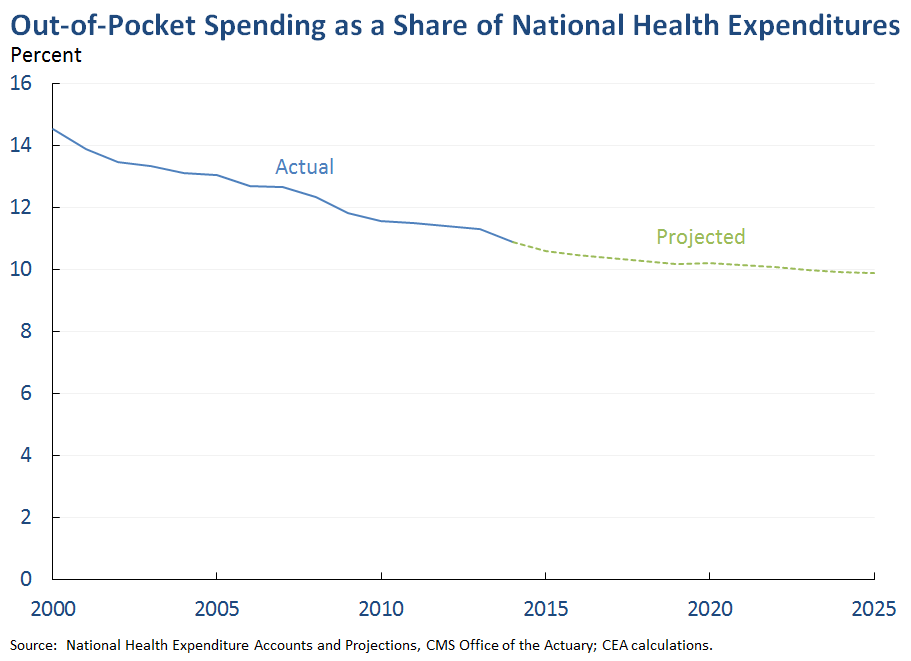 The full set of structural factors that have led to recent years’ slow growth may never be known, but reforms in the Affordable Care Act are making an important contribution. Reductions in excessive payments to providers and private insurers in Medicare have generated substantial direct savings, and recent research implies that these provisions are generating savings in the private sector by reducing the prices that private insurers pay for care. These provisions will continue to place downward pressure on spending growth in the years ahead, as will ongoing efforts that are using tools provided by the Affordable Care Act to widely deploy alternative payment models like bundled payment and accountable care organizations that reward providers that deliver efficient, high-quality care in public programs, efforts that are likely to spur similar progress by private payers. 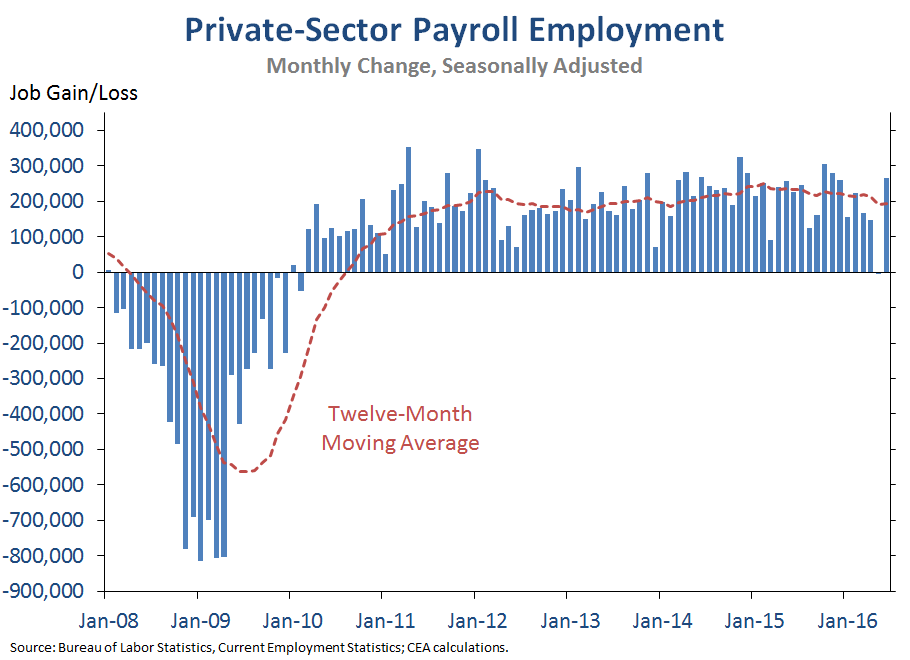 [1] In calculating the average growth rate for the 2000-2010 period, the growth rate for 2006 was calculated based solely on non-drug spending in order to avoid distortions from the creation of Medicare Part D.

[2] Real per-enrollee Medicaid spending is estimated to have risen 4.7 percent in 2015 after having fallen 3.6 percent in 2014.  These swings in growth likely reflect, at least in part, composition changes in the types of individuals covered by Medicaid including changes driven by the Affordable Care Act, so trends in Medicaid are likely a comparatively poor indicator of the underlying trend in health care costs.

[3] These estimates of the effects of expanding coverage on NHE are for 2014.  They were adjusted downward using the actuaries’ estimates to reflect the fact that projected coverage gains were smaller in 2015 than in 2014.