New data released today by the Kaiser Family Foundation and Health Research and Educational Trust show that premium growth in employer coverage, the type of coverage held by the majority of non-elderly Americans, remained low in 2016, extending the recent stretch of exceptionally low premium growth. The average premium for a family with employer coverage is now almost $3,600 lower than if premium growth since 2010 had matched the decade preceding the Affordable Care Act. These data are the latest evidence that per-enrollee health care spending growth has remained low in both the public and private sectors so far in 2016, bolstering the case that much of recent years’ slow growth in health care costs reflects enduring structural changes in the health care system, including reforms introduced by the Affordable Care Act. Despite today’s good news, there is still more to do to ensure that all Americans have affordable access to high-quality health care, including: making further progress in moving our health care system toward payment models that encourage efficient, high-quality care in both the public and private sectors; continuing to strengthen the Health Insurance Marketplace; and building on recent progress by expanding Medicaid in the 19 States that have not yet done so.

SIX KEY POINTS ON NEW DATA ON EMPLOYER COVERAGE IN 2016

1. Premiums in employer-based coverage continued to grow slowly in 2016. The new Kaiser Family Foundation/Health Research and Educational Trust (KFF/HRET) survey finds that the average premium for employer-based family coverage grew 3.4 percent in 2016 in nominal terms, slower than the 4.2 percent growth rate recorded in 2015. This year’s slow growth extends the recent period of slow employer premium growth. The average premium growth rate since the Affordable Care Act (ACA) became law in 2010 has been 40 percent lower than the average growth rate over the preceding decade, and the most recent five years account for five of the six slowest growth rates reported since the KFF/HRET survey began in 1999.

Sustained slow premium growth is generating major benefits for families. Had premium growth since 2010 matched the average rate recorded over the preceding decade, the average total premium for employer-based family coverage would have been nearly $3,600 higher in 2016. A large portion of these savings have accrued directly to workers in the form of lower premium contributions. Employers’ savings on their portion of premium spending may be reducing total compensation costs in the short run, helping to boost job growth; economists agree that these savings will be passed on to workers as higher wages in the long run.

The benefits of slower premium growth have been felt throughout the country. According to data from the Medical Expenditure Panel Survey that were released earlier this summer, the average premium for family coverage offered by private employers grew more slowly from 2010 to 2015 than over the preceding decade in every one of the 40 States for which data are available. For each of these States, the appendix to this blog post reports how much lower the average premium is relative to a scenario in which premium growth since 2010 had matched the average rate for the preceding decade, as well as how those savings will grow in 2016 if premium growth for that State matches the national average growth rate reported in today’s release. 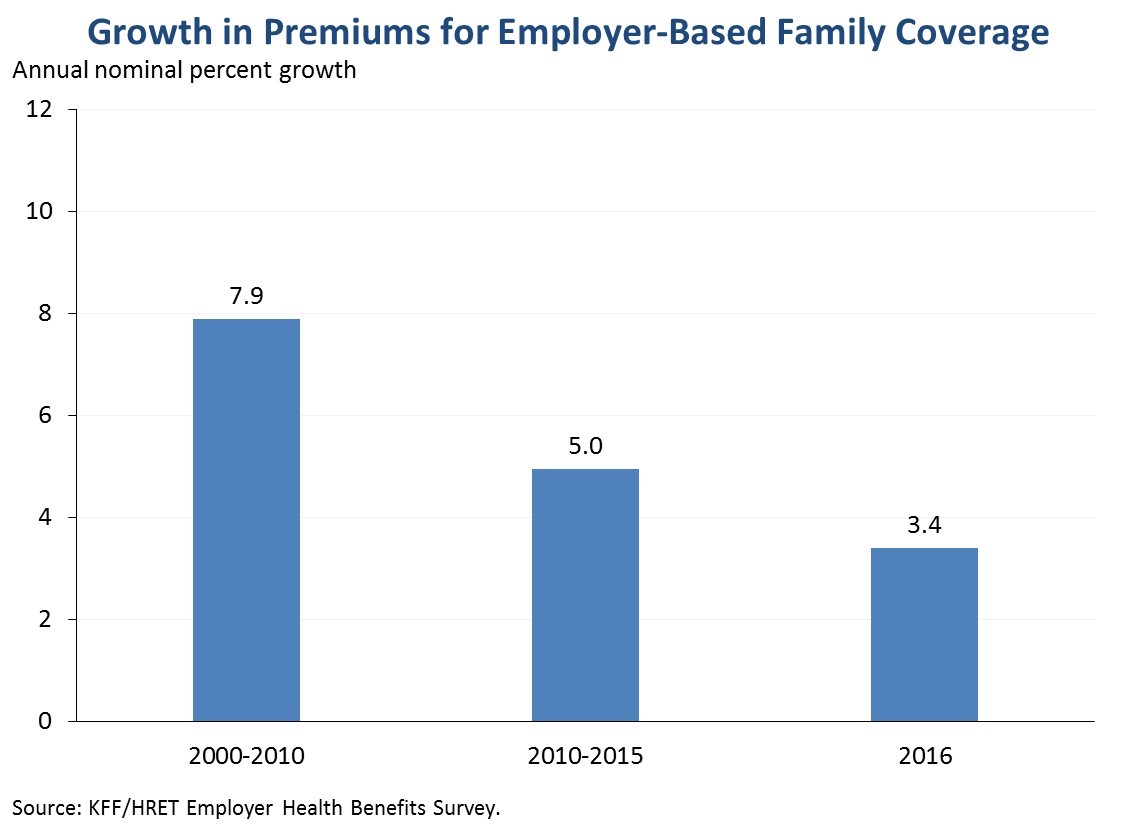 2. The new KFF/HRET data are consistent with a range of other data showing that per-enrollee health care spending growth has remained low so far in 2016. The KFF/HRET estimates corroborate earlier estimates from the Bureau of Labor Statistics’ (BLS) Employer Cost Index data indicating that slow growth in employers’ health benefit costs continued into 2016. The BLS data indicate that employers’ hourly health benefit costs grew by 2.8 percent from the second quarter of 2015 to the same quarter of 2016, similar to the low growth rates recorded over the last several years. Other data indicate that per-enrollee spending continues to grow slowly in Medicare as well. Preliminary estimates based on Medicare spending data published by the Treasury Department suggest that Medicare spending per beneficiary grew only around 1 percent from the first seven months of 2015 to the same period in 2016. 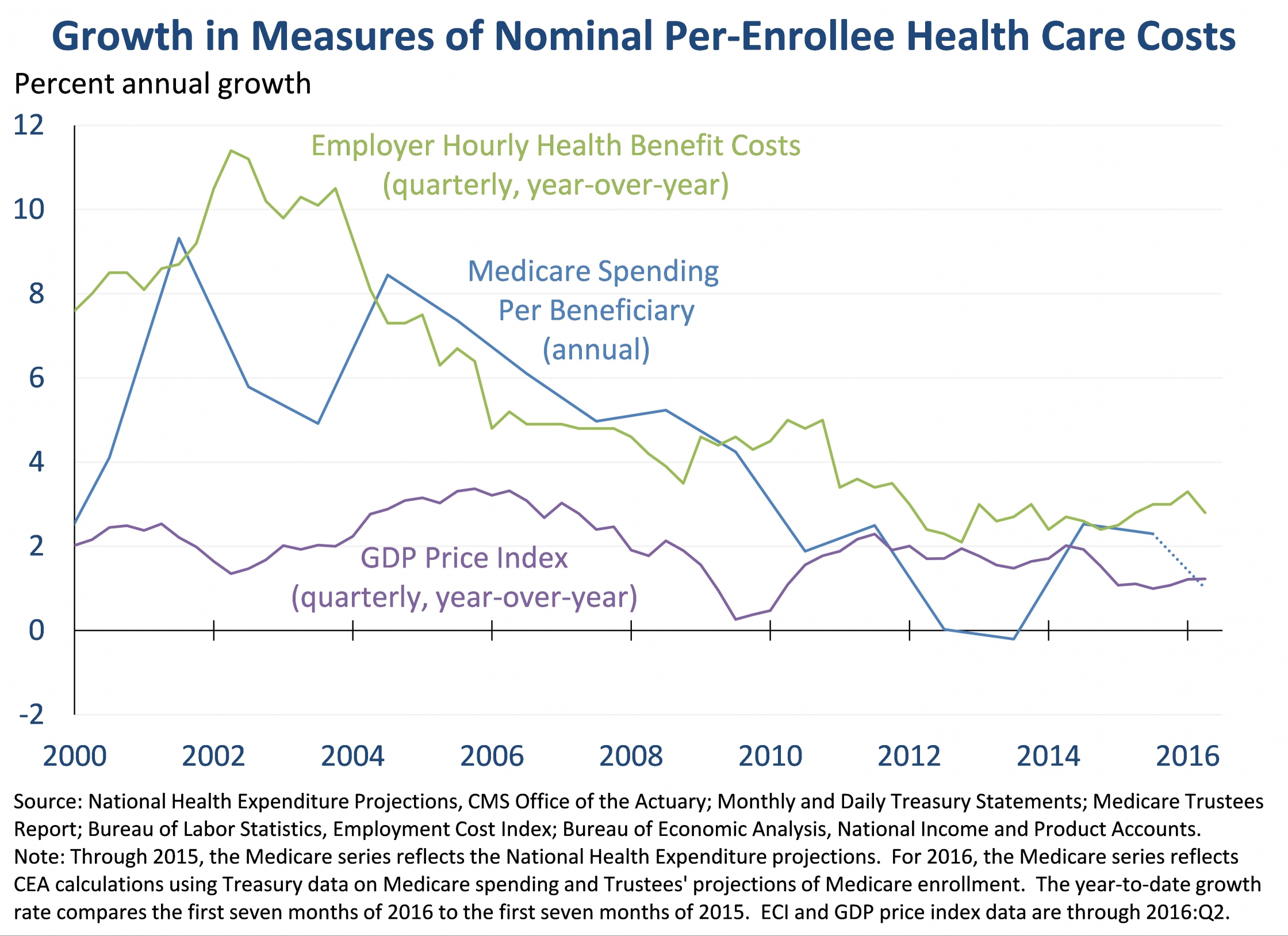 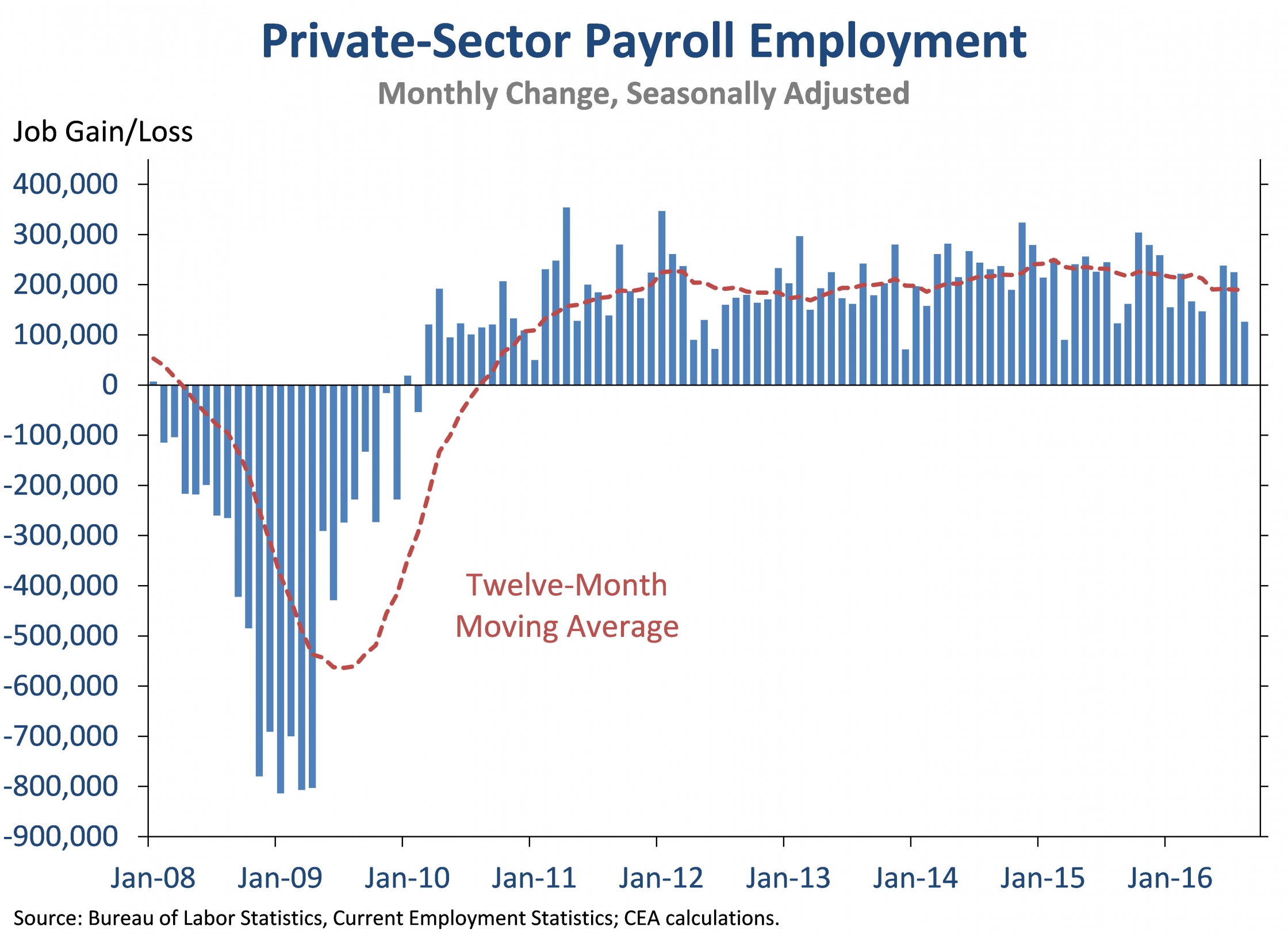 4. Virtually all workers enrolled in employer coverage now have a limit on their annual out-of-pocket spending, a protection that more than one in six enrolled workers lacked when the ACA became law. One core function of health insurance is to provide protection against catastrophic costs in the face of serious illness. Starting in 2014, the ACA required that all non-grandfathered health insurance plans place a limit on total annual out-of-pocket spending, protection which 18 percent of workers enrolled in single coverage lacked as of 2010. The share without an out-of-pocket limit drifted lower after 2010 (possibly in part because firms were preparing for 2014), then fell sharply as the ACA requirement took effect. Today’s data show that just 2 percent of workers in single coverage lacked such a limit in 2016, the same percentage as in 2015. If the prevalence of out-of-pocket limits had remained at its 2010 level, more than 22 million people with employer coverage would lack this protection today. 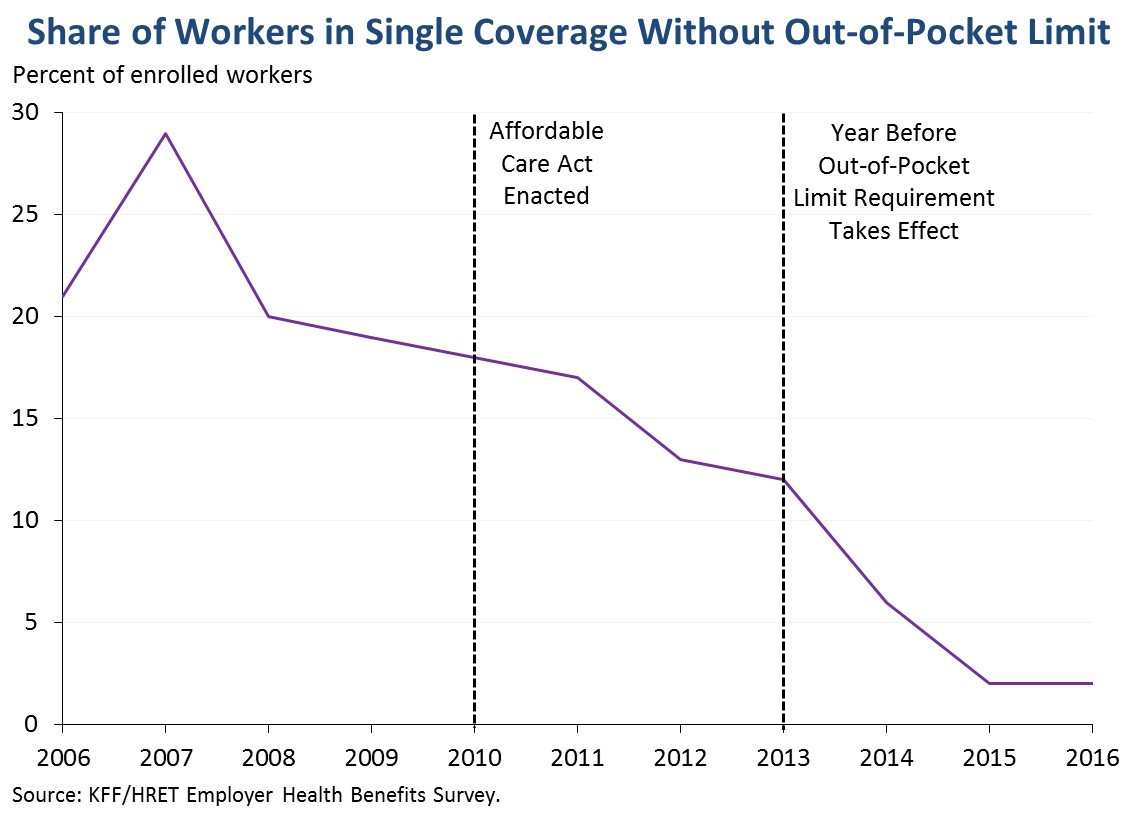 5. Average deductibles in employer coverage rose again in 2016, but are near or slightly below the level they would have reached had they continued to grow at the rate prior to 2010. Typical deductibles in employer coverage have been rising for many years, and the new KFF/HRET data show that trend continued in 2016. As measured in the survey, however, the pace of the increases since 2010 has actually been similar to or somewhat slower than the pace of increases before 2010. This indicates that rising deductibles are not “cancelling out” the benefits to workers of slower premium growth. It also indicates that rising deductibles are likely not an important reason that premium growth has been so much slower recently than in the past. 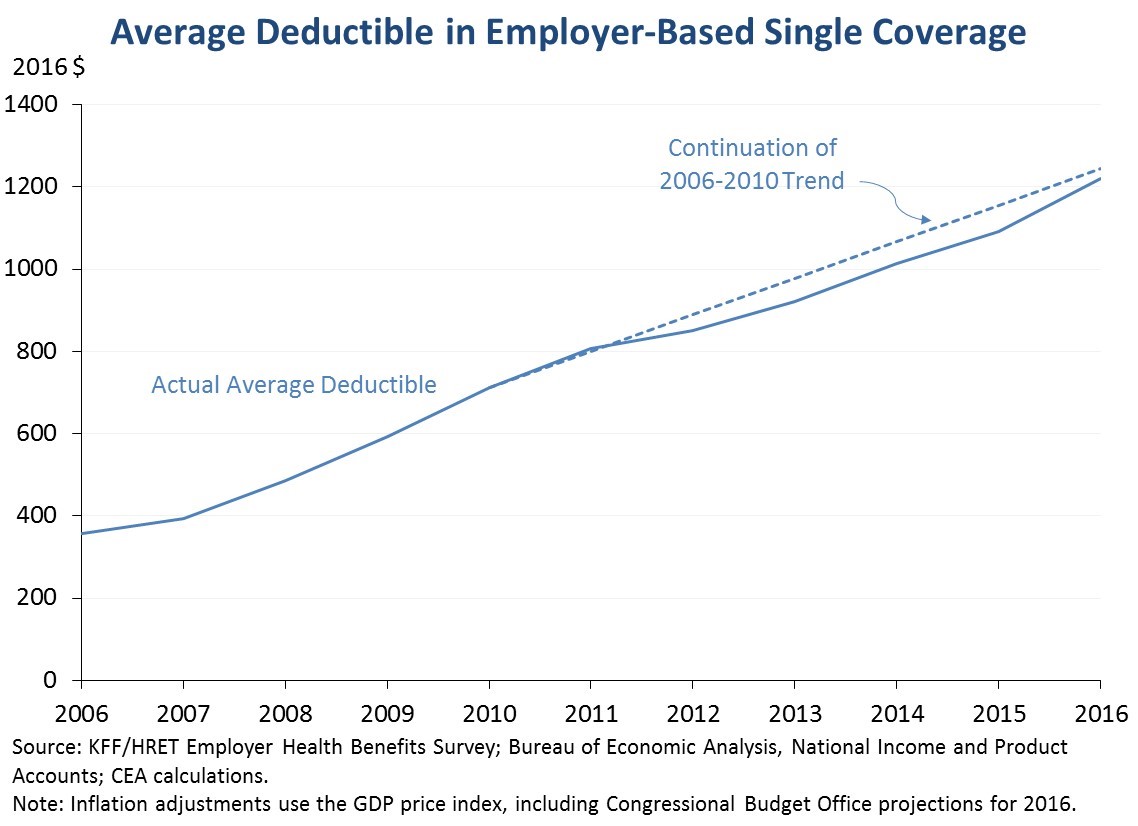 6. Deductibles provide an incomplete picture of the overall trend in out-of-pocket costs in employer coverage, as other forms of cost-sharing have actually fallen relative to overall health care costs. While trends in deductibles receive the most attention, families’ overall out-of-pocket spending burdens also depend on other features of their coverage, including what services are covered before the deductible, the size of their co-payment and co-insurance obligations, and whether they have a limit on their annual out-of-pocket costs. As illustrated in another recent study by researchers at the Kaiser Family Foundation, while the share of overall health care spending that families in employer coverage bear in the form of deductibles has risen, the share they bear in the form of co-payments and co-insurance has actually fallen steadily in recent years. A portion of the recent decline in cost-sharing other than deductibles is likely attributable to ACA provisions that increased the share of people with out-of-pocket limits and eliminated cost-sharing for certain preventive services. Due to these opposing trends in deductibles and other types of cost sharing, out-of-pocket spending as a share of overall health care spending for people enrolled in employer coverage has been close to flat in recent years, both in these data and other available data. 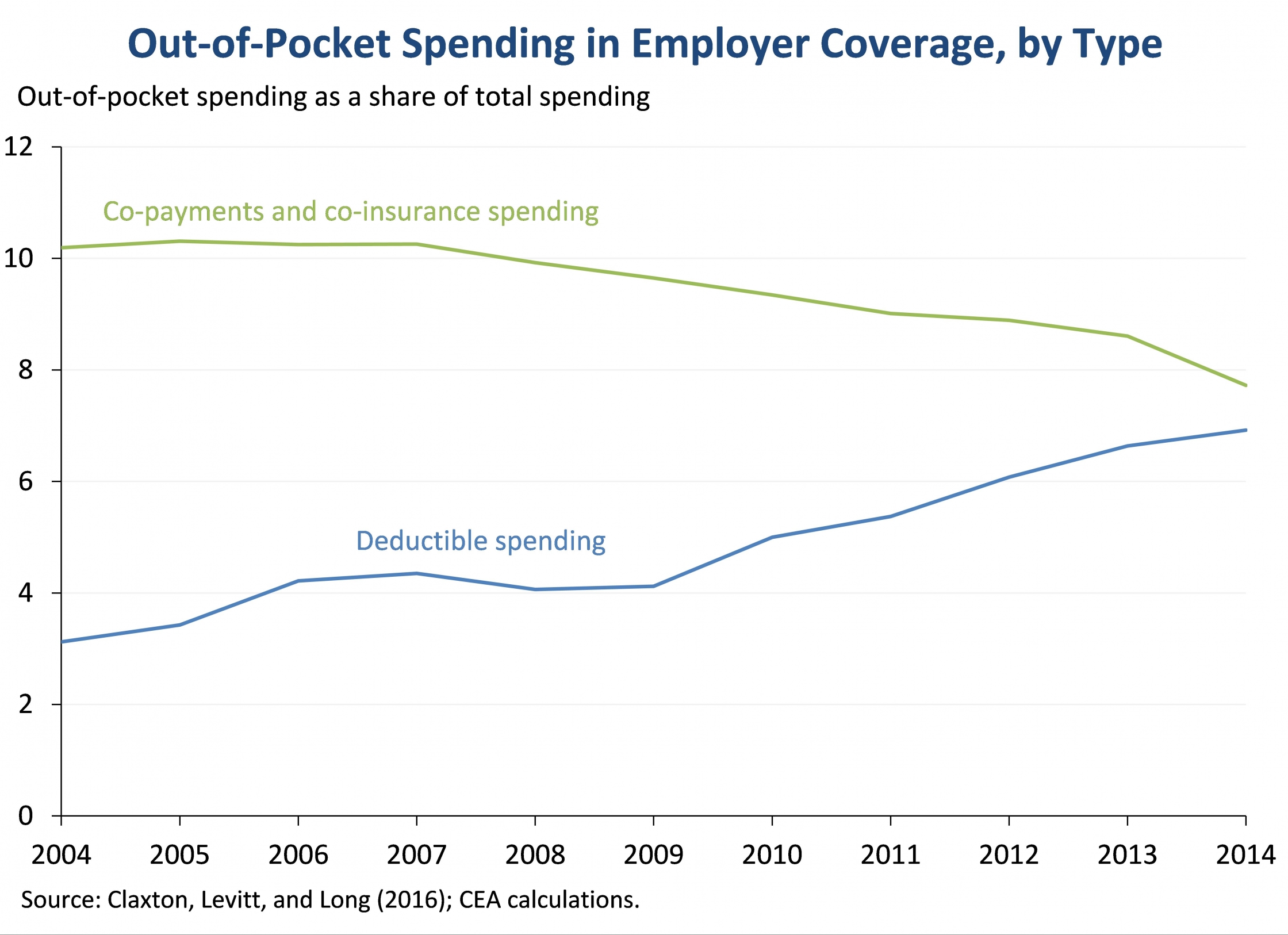 The table below uses State-specific data from the Insurance Component of the Medical Expenditure Panel Survey to calculate how much lower premiums for family coverage offered by private employers are than if premium growth since 2010 matched the rate seen over the decade from 2000 to 2010. To be precise, the table’s second column reports the difference between: (a) the average total premium for family coverage offered by private employers in that State in 2015; and (b) what that premium would have been had premium growth from 2010 to 2015 matched the average growth rate in that State for the 2000-2010 period. The third column of the table repeats that calculation for 2016 under the assumption that premium growth in that State from 2015 to 2016 matches the national average growth rate for 2016 reported in the 2016 KFF/HRET Employer Health Benefits Survey. 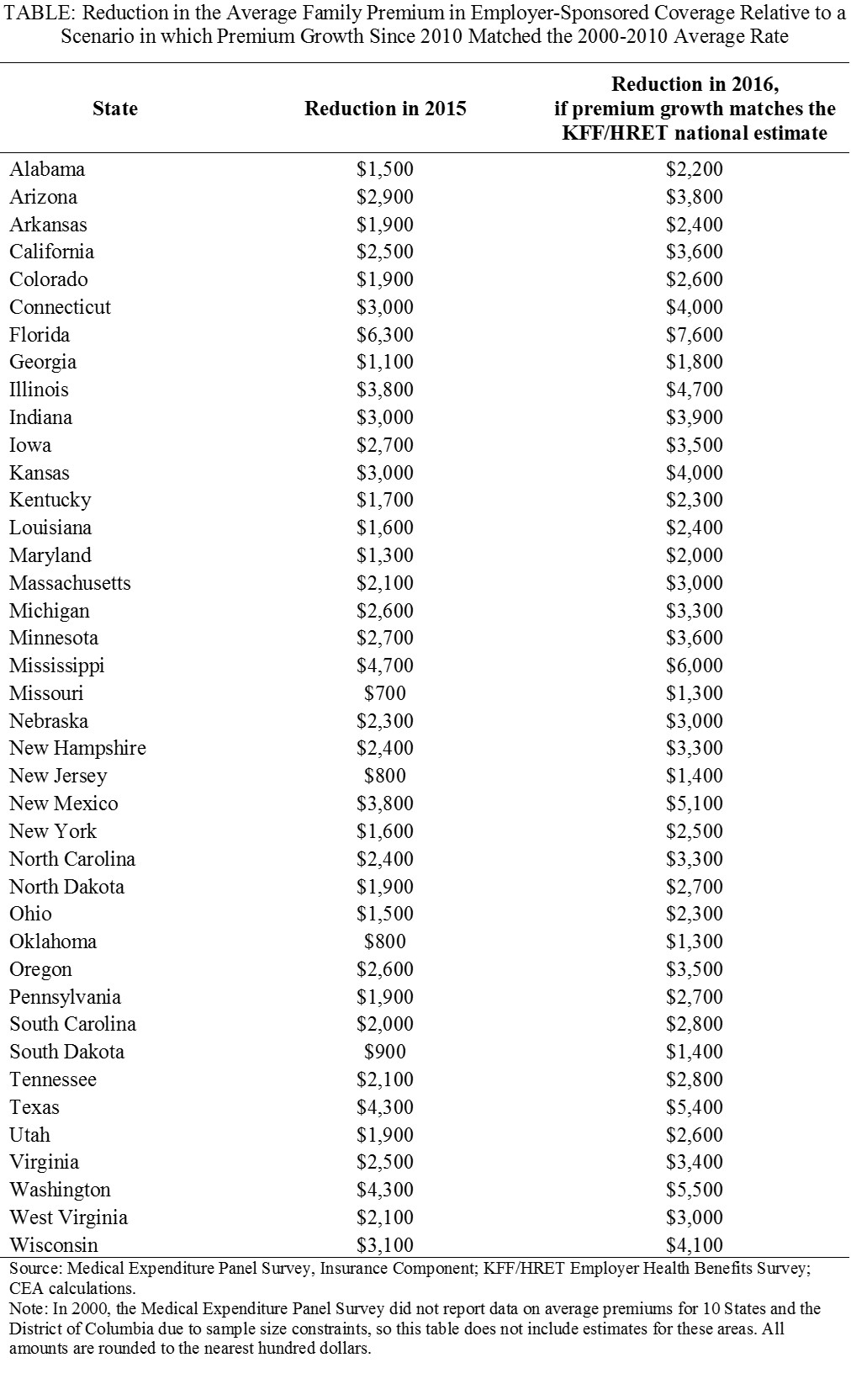