October 11, 2011 at 8:02 PM ET by Nikki Sutton
Twitter Facebook Email
Summary:
Joe Kidd, an Iraq Veteran, explains how the American Jobs Act will make it easier for veterans to find jobs when they return home. 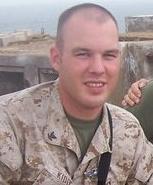 Iraq veteran Joe Kidd said one of the hardest parts of coming home was finding a job. After two deployments in Iraq, the first in 2007 and again in 2009, Kidd was appointed to the emergency room at Camp Lejeune and later became the Leading Petty Officer, managing about forty people. Yet, like many veterans, Kidd found it was difficult for potential employers to understand his experience, making finding a job outside of the service a challenge.

“I had forty people underneath me and then I got out in April, you know thinking, hey some of this should transfer, but no nothing really transferred. That’s pretty much been the hardest thing, knowing that nothing transfers….employers don’t understand military jobs”

Last month when Kidd heard President Obama introduce the American Jobs Act from the First Lady's box at a joint session of Congress, he was heartened to hear that it included a call for ensuring we have a career-ready military. Both sides of Congress stood in support as President Obama spoke about our national obligation to help veterans find jobs:

Pass this jobs bill, and companies will get extra tax credits if they hire America’s veterans. We ask these men and women to leave their careers, leave their families, risk their lives to fight for our country. The last thing they should have to do is fight for a job when they come home.

The American Jobs Act includes tax credits to encourage businesses to hire unemployed veterans and that makes sense to Kidd. "Hiring a veteran is one of the most patriotic things you can do," Kidd said. And with the American Jobs Act there is an added incentive.

Businesses that hire veterans who have been unemployed six months or longer would receive a tax credit up to $5,600, and that credit rises to $9,600 for veterans who also have service-connected disabilities. That is why President Obama is urging Congress to pass the Jobs Act right away.