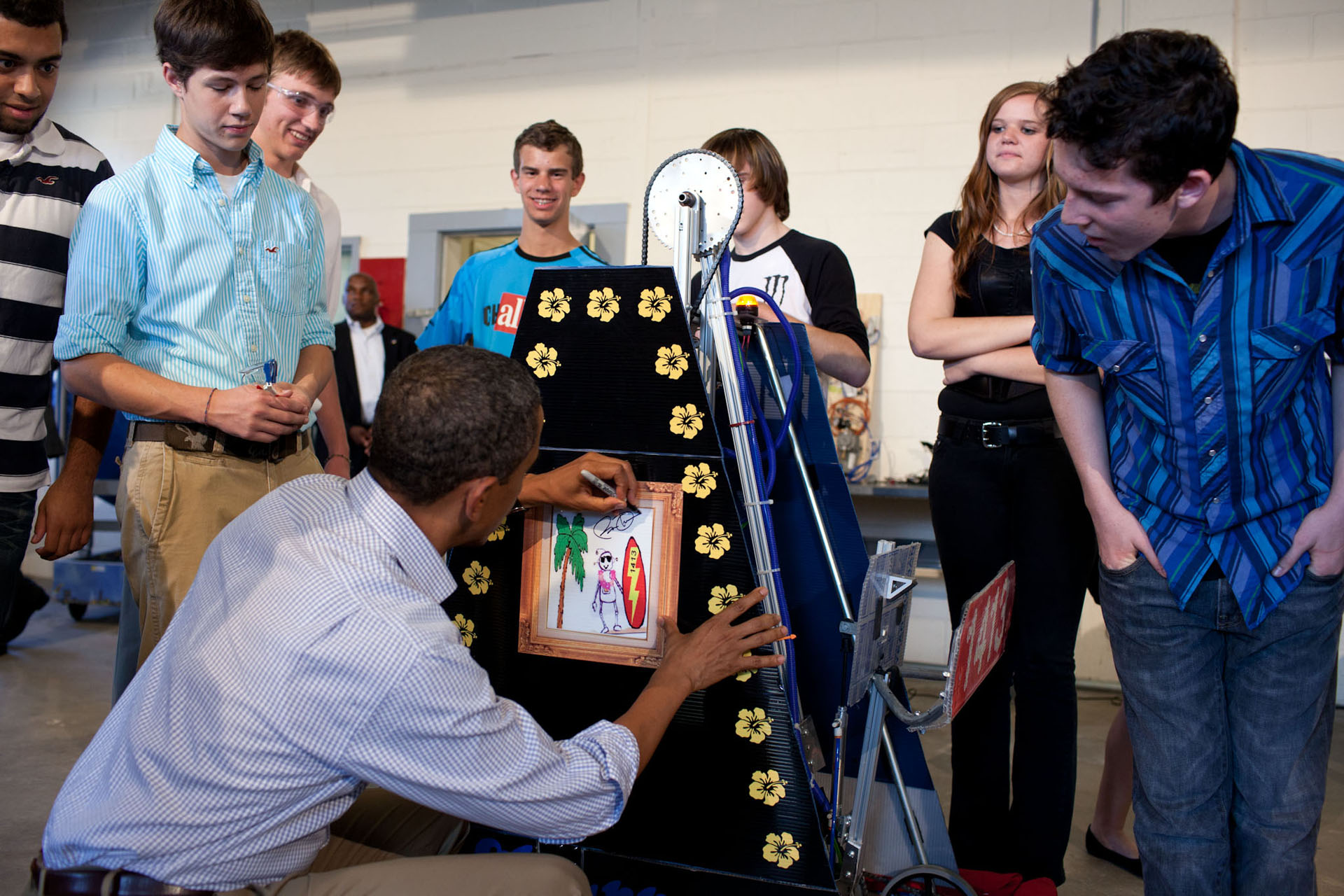 President Barack Obama signs "Skrappy" the robot during a tour of the computer lab and robotics workshop at Bluestone High School in Skipwith, Va., Oct. 18, 2011. The Bluestone Robotics team was founded in 2004 and built their first robot with a basic kit of parts and scraps from area businesses. (Official White House Photo by Pete Souza)

Tracy Ellis teaches robotics and computer classes at Bluestone High School in Mecklenburg County, Virginia, one of the stops on President Obama's American Jobs Act Bus Tour this week. Ellis supports President Obama’s jobs plan because the investments in school infrastructure and modernization will help his students access the tools they need to train for 21st century jobs.

Ellis said that computers play an important role in our society. Everyone has one, but no one is willing to open them up and fix them if something goes wrong, he said. He teaches his students to repair computers and address many of the problems computer users encounter, which he says is a valuable skill that gives them practical experience for future careers. His more advanced classes are even responsible for providing technical support for the school’s computers.

Ellis also teaches an afterschool robotics program that attracts 25 to 30 students each school year. He said the robotics program is a great way to get students involved in science and engineering who might not otherwise be interested, especially female students. Six other teachers as well as engineers from the community help students build a robot each spring, which they enter in competitions with other schools. President Obama met the team’s robot, Skrappy, when he visited Bluestone yesterday.

Ellis said the robotics program is in its ninth year. It relies on money from private grants and fundraising, but more funding would help them better stock their robotics lab with tools and supplies they need to work on the robots. Better funded schools are able to assemble parts they need quickly using supplies on hand, but the Bluestone team loses precious building time to travel some 30 miles to the nearest large hardware store. “Build season” only lasts for six weeks, from January to March, so losing even a few days hurts their chances come competition time.

Programs like the ones Ellis teaches are crucial to ensuring students have the science, technology, engineering, and math skills they need to access 21st century jobs and careers. The American Jobs Act also offers our students important support. The President has proposed investing $25 billion in our school infrastructure, some of which can be used for modernization efforts to build new science and computer labs and to upgrade the technology infrastructure in our schools. While this investment will likely help unemployed workers find jobs performing upgrades and modernization, it may mean that some of Ellis’s students will be out of a job while at Bluestone.

Find out what other people are saying about the American Jobs Act:

See what mayors have to say about the American Jobs Act