President Obama Announces his Nominees for Secretary of Commerce and U.S. Trade Representative

May 2, 2013 at 1:00 PM ET by Colleen Curtis
Twitter Facebook Email
Summary:
Penny Pritzker is President Obama's choice to lead the Commerce Department, and he wants Mike Froman to be the next U.S. Trade Representative 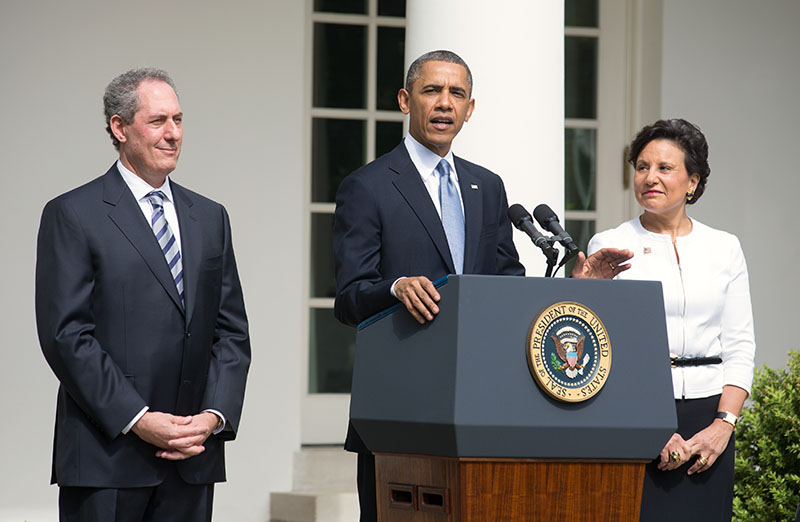 President Barack Obama announces the nominations of Penny Pritzker as Secretary of Commerce, and Mike Froman as U.S. Trade Representative, in the Rose Garden of the White House, May 2, 2013. (Official White House Photo by Chuck Kennedy)

President Obama today began a three day trip to Mexico and Costa Rica, where he will meet with leaders to discuss ways the U.S. can deepen our economic and trade relationships across Latin America –- relationships that create jobs and growth here at home, and offer our businesses growing markets where they can sell more American-made goods and services abroad.

Before he left the country, the President spoke in the Rose Garden and announced his intention to nominate two "outstanding individuals" to his Cabinet.

Penny Pritzker is President Obama's choice for Secretary of Commerce. The President praised the Chicago businesswoman, who was a member of his Jobs Council. "Penny is one of our country’s most distinguished business leaders," he said.

She's got more than 25 years of management experience in industries including real estate, finance, and hospitality. She’s built companies from the ground up. She knows from experience that no government program alone can take the place of a great entrepreneur. She knows that what we can do is to give every business and every worker the best possible chance to succeed by making America a magnet for good jobs.

And Penny understands that just as great companies strengthen the community around them, strong communities and skilled workers also help companies thrive.

President Obama's pick for U.S. Trade Representative, a Cabinet-level position, is Mike Froman, one of his top national security and economic advisors for several years. The President highlighted the work Froman has done organizing international trade summits. "He's been a key negotiator alongside Ron Kirk on those trade agreements for South Korea, Colombia, and Panama, which support tens of thousands of American jobs," said President Obama.

"He has won the respect of our trading partners around the world, the President continued. "He has also won a reputation as being an extraordinarily tough negotiator while doing it. He does not rest until he’s delivered the best possible deal for American businesses and American workers. He’s fought to make sure that countries that break the rules are held accountable."

And Mike believes, just as I believe and just as Penny believes, that our workers are the most competitive in the world, so they deserve a level playing field. And Mike's going to continue to fight for that level playing field in his new role, as he helps to move forward trade negotiations with both the Asia-Pacific region and Europe, and will also continue to advise me on a broad range of economic issues.