October 28, 2016 at 9:30 AM ET by Jason Furman
Twitter Facebook Email
Summary:
Real GDP grew 2.9 percent at an annual rate in the third quarter, with strong export growth and continued strength in consumer spending.

The economy grew 2.9 percent at an annual rate in the third quarter of 2016, a noticeably faster pace than in the first half of the year. Exports, which have faced significant headwinds in recent years from slow growth abroad, grew at an annual rate of 10.0 percent in the third quarter, their fastest quarterly pace since 2013. Consumer spending continued to grow at a solid pace in the third quarter, while inventory investment (one of the most volatile components of GDP) boosted GDP growth after subtracting from it in the prior five quarters. In contrast to the pattern of recent quarters, business fixed investment also contributed positively to GDP growth, though it continues to be restrained by slower global growth. But more work remains to strengthen economic growth and ensure that it is broadly shared, and the President will continue to take steps to promote greater competition across the economy, including in the labor market; support innovation; and call on Congress to increase investments in infrastructure and to pass the high-standards Trans-Pacific Partnership. 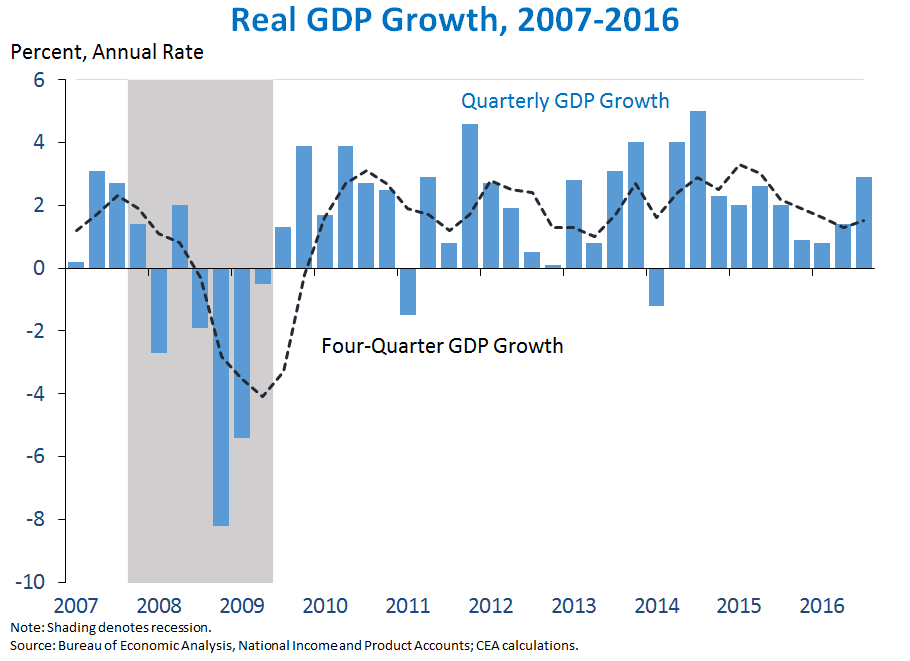 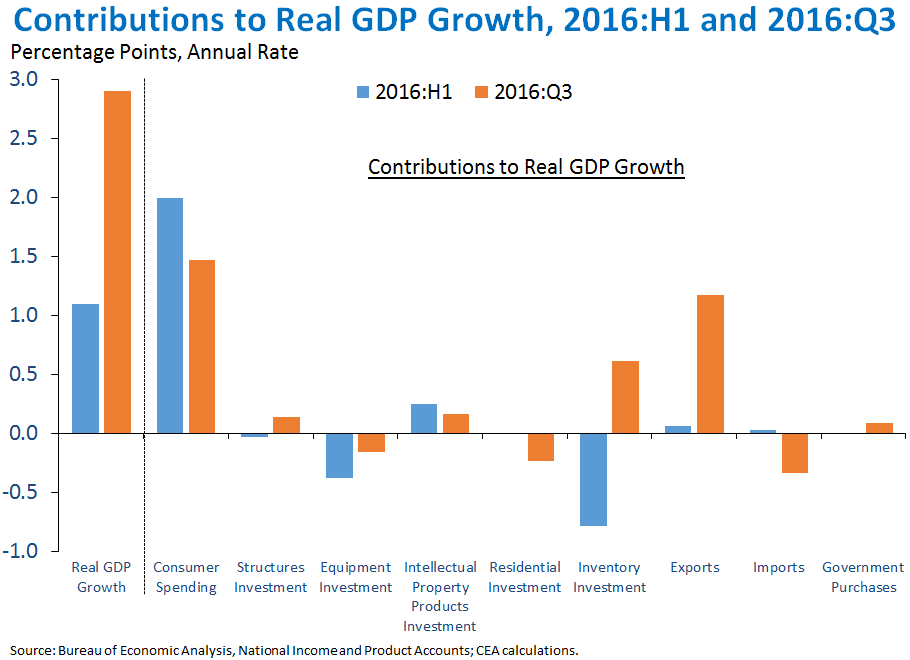 3. Real exports grew 10.0 percent in the third quarter, their fastest quarterly growth since 2013. In recent years, slowing global demand has been a key headwind to U.S. growth, as the volume of U.S. exports to foreign countries is sensitive to GDP growth abroad. In its October World Economic Outlook, the International Monetary Fund (IMF) revised down its forecast of global growth for the four quarters of 2016, removing an expected pickup in growth from 2015 to 2016. The IMF currently forecasts global growth to pick up in 2017, suggesting less downward pressure on export growth going forward. Nevertheless, real export growth in the third quarter was substantially faster than in recent quarters, due in part to a large increase in agricultural exports. (As shown in the chart below, real export growth had slowed even faster in recent quarters than the slowdown in world growth would have implied, potentially explaining some of the bounce-back in the third quarter.) The sensitivity of U.S. exports to foreign demand and the large contribution of exports to overall growth in the third quarter underscore both the importance of opening foreign markets to U.S. exports by passing the high-standards Trans-Pacific Partnership and the agreement’s potential to strengthen the U.S. economy as a whole.

4. As oil prices have risen slightly in recent months, contractions in oil-related investment have weighed somewhat less on overall growth. The price of Brent crude oil was $31 per barrel in January 2016, nearly three-quarters lower than its recent peak in June 2014. While the decline in oil prices has benefitted consumers and the economy overall, it has weighed heavily on both mining and logging employment and on investment in mining exploration, shafts, and wells—which includes petroleum drilling structures—which declined by nearly two-thirds from the fourth quarter of 2014 through the second quarter of 2016. Partly as a result, overall structures investment subtracted an average of 0.2 percentage point from quarterly real GDP growth over this period. From its trough in January, however, the monthly price of Brent crude oil increased to $47 per barrel as of September, and the number of oil and natural gas rigs in operation (which reflects the rate of drilling for new oil and natural gas) has risen for five consecutive months. Consistent with the increase in oil prices, investment in mining exploration, shafts, and wells contracted more slowly in the third quarter of 2016 than in earlier quarters, and overall structures investment added 0.1 percentage point to GDP growth. Since both oil-related investment and employment tend to lag prices by several months, the recent moderation in oil prices may translate into a slowdown in the pace of employment losses and further slowing in the rate of contraction in mining exploration, shafts, and wells investment in future quarters. 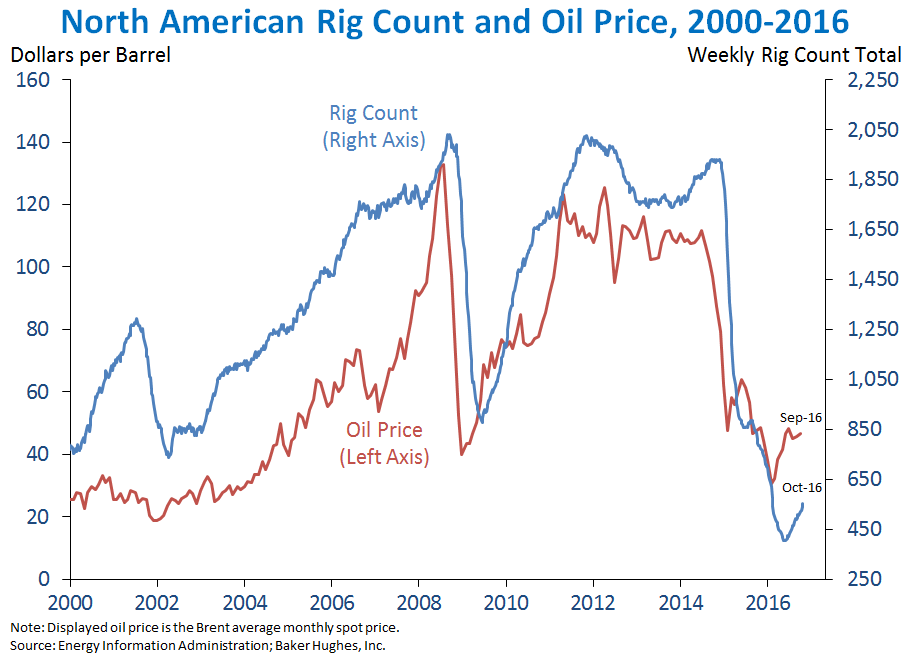 5. Real private domestic final purchases (PDFP)—the sum of consumption and fixed investment—rose 1.6 percent at an annual rate in the third quarter, a somewhat slower pace than in recent quarters. PDFP—which excludes more volatile components of GDP like net exports and inventory investment, as well as government spending—is generally a more reliable indicator of next-quarter GDP growth than current GDP. In the third quarter, the divergence between overall real GDP growth and the relatively weaker contribution of PDFP to growth was largely accounted for by the large positive contributions of inventory investment and exports to real GDP growth. Overall, PDFP rose 1.9 percent over the past four quarters, above the pace of GDP growth over the same period. 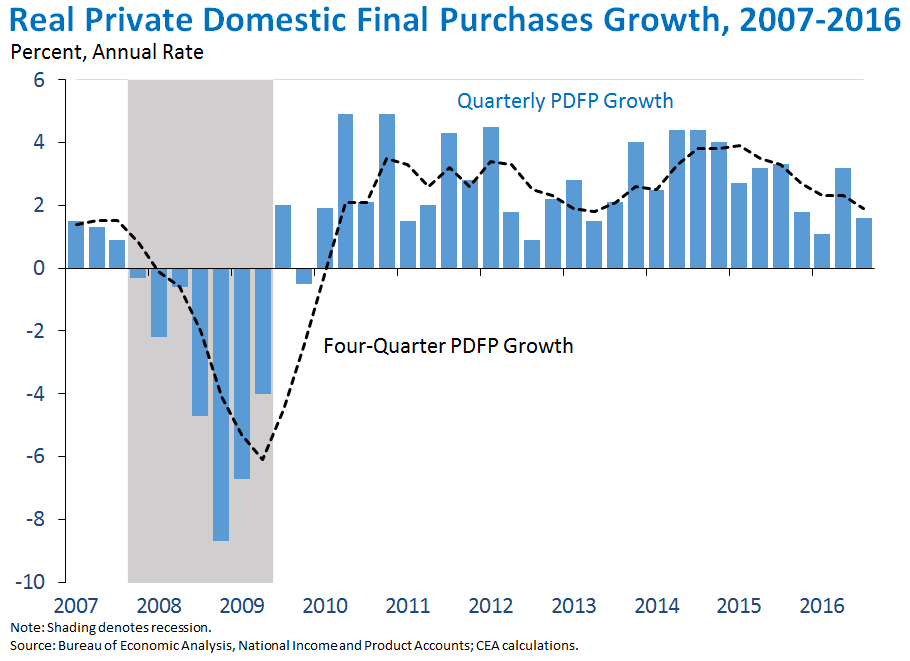